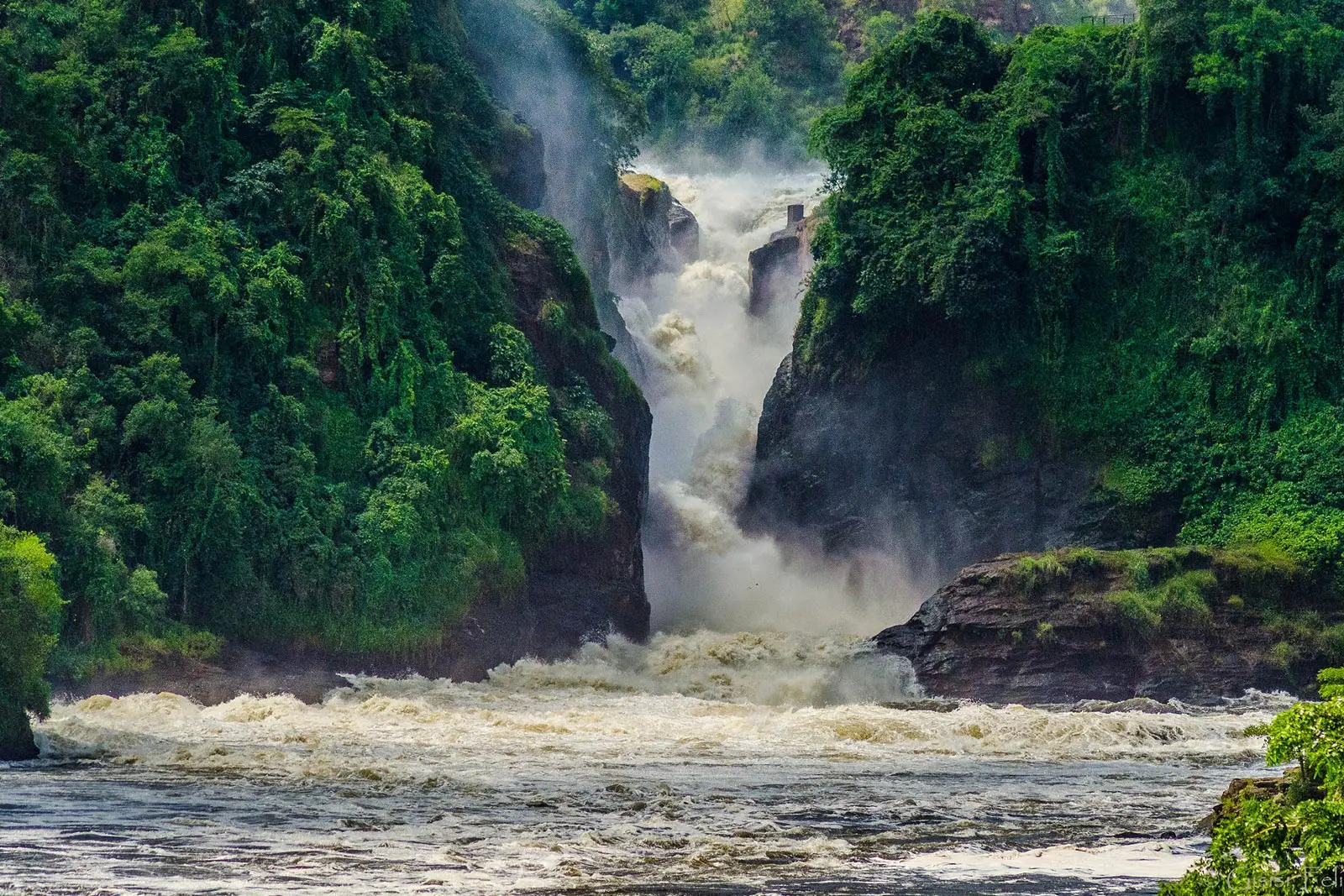 Murchison falls National park is jam-packed with everything Uganda has to offer, It’s Uganda’s largest national park Park, sitting on the shores of Lake Albert, northwestern Uganda. It’s famously known for it’s thunderous Murchison Falls, where the Victoria Nile River surges forcing its way through a narrow gap in the rocks, only 7 m wide, tumbling 43 m, before flowing westward into Lake Albert.

The park’s endowed with over 76 species of mammals, big game, including elephants and hippos, and you could catch sight of the chimpanzee in the Kanyiyo Padidi mahogany forest and hosts Uganda’s largest population of Nile crocodile. The Lake Albert Delta is an eyesight  to over 450 known bird species in the park, including the rare shoe-billed stork, kingfishers, herons, hornbills, turacoes, the shoebill among others.

The Park is also connected by daily domestic flight chatters from Entebbe International Airport, to Kidepo Valley National Park and Queen Elizabeth National Park, which land at Pakuba Airstrip and Bugungu Airstrips .The park offers a range of tented camps and safari lodges to accommodate visitors.

Murchison falls became so famous when they filmed a movie called “African Queen” which featured “Katherine Hephurn and Humphrey Bogart”. Later in 1907, a writer called Winston Churchill visited and also wrote a book called “My African Journey” published in 1908. 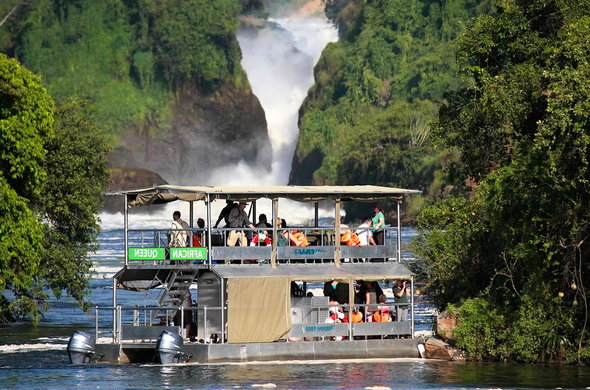 Murchison falls offers the best place for adventure tours. It’s an exciting experience for all tourists and it’s a must-visit for everyone across the world. Murchison is home to 76 mammal species, 400 bird species, and the big four animals among the big five animals. This includes the Elephant, Lion, Buffalos, and Leopard but doesn’t have the Rhinos, they can be organized to be seen on your way back to Kampala at Ziwa Rhino Sanctuary. Ziwa Rhino Sanctuary is an amazing home for over 40 Rhinos and other reptile species. However, Murchison falls national park is not the only place for wildlife, other places can also be visited like the queen Elizabeth national park which is a few meters away, and other places.

How to get to Murchison Falls National Park

From Kampala to Murchison Falls National Park takes over 4-6 hours that’s (305 km) to drive. The park’s headquarters are at Paraa (85 km from Masindi) but the most direct route is through the southern gates (Kichumbanyobo and Masindi South Gate). The northern gates (Purongo or Takigate-Packach) is also another option but longer compared to other gates.

It’s also possible to use Kajansi aircraft because it’s near Kampala if you’re in Kampala and it’s the nearest aircraft to Murchison falls national park is Pakuba.

Tourists that organized to go to Murchison Falls National Park either by road or air will have access to everything in the park as they organized. The journey by air takes roughly an hour and then by road can take like 4-6 hours.

Murchison falls national park is the best place for bird watching be it has various bird species that are always flying all over the park. They can be seen while on your tour mainly on nature walks, boat cruises, and many other spots. Birds that are found on the shores of a water body their different from the ones in the forest though they all fall into one category of birds.

Murchison Falls National Park is rich in wildlife and you can get to see many things when on a game drive. The park has various wildlife species including 400 species of birds, over 76 types of mammals, and over 40 reptiles. All those species are spread freely all over the savanna grasslands, grazing or hunting for prey. Such beautiful things make a perfect game drive while on a tour. The best place to have a game drive from is the northern banks since that’s where the biggest number of wildlife living in the Savanna plains were a smaller number of wild animals.

The best time to come to the park for a game drive is during the dry season when the grass is short in the months of July to august and September to December so game viewing is at its best. If you come for touring in the wet season, the grass is a bit tall and it’s challenging especially during game viewing, some animals might hide to avoid the cold.

Murchison falls national park gained its name from the falls called Murchison which are sometimes called Kabalega falls. The lower waterfall of Murchison falls is called Victoria Nile River which is 20 miles east of Lake Albert. The Victoria Nile goes through many miles of rapids before narrowing to a width of over 6 meters and dropping about 120 meters in the series of three cascades. That fall is generally called Murchison/Kabalega Falls. The falls have a very beautiful view of nature that will give you a good memory to remember in Uganda.

Murchison falls national park has various water bodies and they all have different activities to be done at each of them including Lake Albert, Lake Kyoga, and Victoria Nile which are all beautiful water bodies.

All the boat cruises usually start at 2:00 pm at Paara Jetty the meeting point and they last for three hours. You get to see various animals like Hippopotamus, Elephants, Waterbucks, Buffalos, Kobs, Giraffes, and different bird species like Shoebills, Saddle-Billed Stork Goliath Heron, and many others.

Murchison falls national park is the largest conservation park in Uganda which has protected species and habitats from poaching since 1980. The number of species has recovered well and now you are able to see a large number of wildlife through game drives, boat cruises, and maybe nature walks making it a good location for the Uganda wildlife safaris.

Murchison falls national park offers hiking and nature walk for tourists as an opportunity to explore this vast wilderness on foot. Hiking is done at the top of the falls, in Rabongo forest, and in Kaniyo Pabidi. These adventures will be a great experience for nature lovers and bird watchers as they enjoy the great views of wildlife in Murchison falls national park. As for the birds and the different plant life at a close range as they walk through the low hills, riverine forests, and gullies.

This activity is also available at the Murchison falls national park which is mostly done in the morning after breakfast. This takes 1-6 hours a day compared to the movements of the chimpanzees. This activity requires parking lunch for yourself, water, and at least a jacket just in case of rain.

These walks are done outside the park to show the tourists how people who stay around the park live, how they survive, and how the park is helpful to them. This can help tourists interact with the villagers, and eat some of the African food mostly Matooke and many other food stuffs.

This activity is mostly done by the villagers near the park by listening to and watching Mubako cultural dances and music near the ferry. These performances are done in their villages on the southern side of the river and in some lodges if organized.

Fishing can be done by tourists if interested. The falls also have a variety of fish including the Nile Perch which makes fishing easy and fun. You can choose to roast it on fire by yourself or bring it to a nearby restaurant to prepare it for you at an affordable fee.

Bird blind at the delta

This activity is mainly to look at shoebills in the papyrus swamp. For visitors to the park, this can be done using a track or a boat organized by the tour guide. A tour guide must also be around to help you out because this activity is quite tricky.

This activity is really an amazing experience just like in an African movie where you get to listen to the nightlife of the animals in their home. This is organized daily for tourists and also affordable whether you come with your tent or book one at the park.

When it comes to accommodation, the park has a variety of rooms for all kinds according to your budget. Restaurants and bars are also there for meals and leisure that will suit your needs. The park is always there to welcome a comfortable stay and tour safari.

There are lodges both on the north and south side of the park. These include;

This is found on the northern side of the park which has a wonderful view of the river from the accommodation room. This can be just a perfect place for a honeymoon to enjoy a quiet and peaceful place. These lodges have private aircraft for easy transportation if you want to fly. The place has free Wi-Fi, a restaurant, a swimming pool, and a bar. This can be a perfect place to enjoy your Uganda safaris too.

This is located on the southern side of the park and it’s surrounded by nature and a river a bit far from the residents. Primate species usually frequent this place and they are not harmful to human beings. Hippos can also be seen in the water if you get close to the river and some bird species that are found in the water.

These are also located on the southern side of the park with an amazing view of the Nile, you get to have an open-air dinner which can be a romantic Sean for tourist couples. The lodges have a swimming pool and a well-decorated place full of nature. Large cottages, basic tents, and self-camping offers are available at an affordable cost. 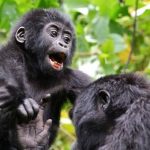 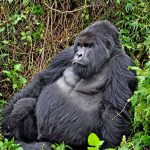