7 Days Uganda Wildlife Safari is a Spectacular Uganda Holiday Package that camouflages with a helm of top Uganda Safari Insights , Crafted to include the most Visited Uganda Wildlife Spots, from the renowned Africa’s Savannah Hunters, the thunderous Murchison falls, the Majestic Queen Elizabeth National Park famously known for its tree climbing lions in Ishasha Sector, Ziwa Rhino Sanctuary that testifies to Ziwa Rhinos, to Kibale National Park a prime destination for Chimpanzee tracking Safari. It all presents the Big 5 of Africa

Depart Kampala for Murchison Falls National Park. On your way, en-route at Ziwa Rhino Sanctuary, a home to at least 40 mammals and reptilian species including forest monkeys, antelopes, hippopotamuses, crocodiles and numerous bird species and do On foot rhino tracking. After tracking have lunch and proceed with your 7 Days Uganda tour to Murchison falls national park, visit Top of the falls, such a lovely scene for viewing the fall and having picnics. Dinner and overnight Sambiya River lodge(Standard/Mid-Range accommodation).

7 Days Uganda Wildlife Safari, Set off for an early game view drive on the North of the Nile.  Check out lions, buffaloes, waterbuck, Jackson’s hartebeest, giraffs,elephants, oribi and baboons are some of the animals you will spot. After lunch go for a 2 hrs launch cruise on the Victoria Nile River spot schools of hippos, large crocodiles, small herds of buffalo. There is rich birdlife on the papyrus banks, watch out for the shoebill stork, the most sought after bird in Africa. Dinner and overnight at Sambiya river lodge mid range accommodation.

Have morning break fast and proceed  to Kibale National Park a compacted gem of over 13 species of primates, habituated communities of common chimpanzee as well as several Kibale forest species including the central African Monkeys like the Uganda mangabeys, the Ugandan red colobus and the L’Hoest’s monkey. The park’s population of elephants travels between the park and Queen Elizabeth National Park. Other terrestrial mammals that are found within Kibale National Park include red and blue duikers, bushbucks, sitatungas, bushpigs, giant forest hogs, common warthogs, and African buffalo.

The most known Kibale Hunters that are present include leopards, African golden cats, servals, different mongooses and two species of otters. Well, sometimes the Lions visit this park in search for a meal.  Enjoy this scenic ride to Kibale. Kibale national park has the highest concentration of primates in East Africa including chimps, black and white colobus monkeys, blue monkeys and baboons. Go for an afternoon primate walk to Kanyanchu river camp, the most popular walk in the park. It highlights a medley of flora and fauna within the forest. Dinner and overnight at Mountain of the moon mid-range accommodation.

Morning transfer to Kibale National Park headquarters to go track chimpanzees. The park is known to harbour the largest number of primates in Uganda. Therefore the guided forest walk will not only reward you with chimps but with other primates like the grey cheeked Mangabeys, black and Red tailed colobus monkeys, baboons, phoestes, and others. The guide will ensure that the walk is interesting by providing information not only on primates but also on other organism flora inclusive.  In the afternoon you will go for another guided nature walk to the Bigodi swamp where you will see plenty of rare fauna and flora. Dinner and overnight at Mountain of the moon mid-range accommodation. 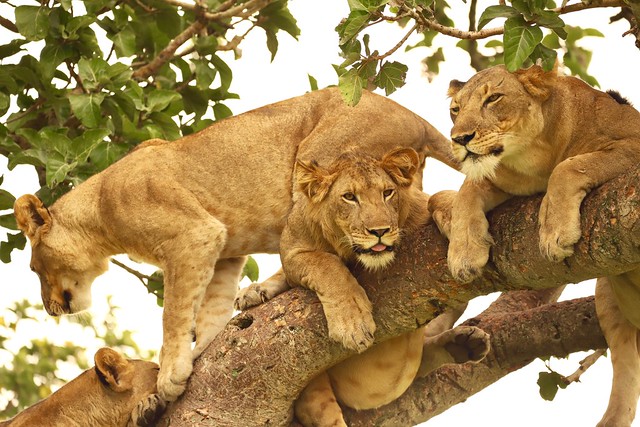 After an early breakfast, proceed to Queen Elizabeth National Park, One of the Most compacted gem in Africa known for its abundant wildlife that include African elephant, Ugandan kob,African buffalo , hippopotamus, topi, waterbuck, warthog, giant forest hog, Nile crocodile, leopard, spotted hyena, chimpanzee, lion among others. The park is also a home to over 95 mammal species and over 600 bird species. The area around Ishasha Sector is famously known for its tree-climbing lions, whose males often sport black manes.

We will Carry out a Morning game drive in the Mweya Peninsular that has a magnificent location of the Rwenzori glacial peaks; check out Lake Katwe and other small crater lakes. Take dinner and stay overnight at Enganzi game lodge.

After a cup of coffee, start the day with a game drive in the Kasenyi plains that will lead you to see black and white Colobus, bush buck, Uganda Kob, topi, Defassa waterbuck, and Cape buffaloes. A range of birds like Cassin’s grey flycatcher, broad billed roller, black bee-eater along the banks of Lake Edward. This can take you 2-3 hrs. In the evening, go for a launch cruise on Kazinga channel along lake George-lake Edward, come eye-eye with yawning hippos, crocodiles, leopards though sporadic.  Watch birds for birders with over 550 resident species like flamingos, red chest, papyrus Gonolek, pink backed pelicans, malachite kingfishers, yellow crown, pink backed pelicans, water thick-knee, yellow-billed stork, shoebill stock. Do not forget your camera; dinner and overnight at Enganzi game lodge.

Enjoy your breakfast; thereafter proceed for another Game drive in the morning on your way back to Kampala have lunch and  a stopover at the equator  and continue with the journey reaching Kampala in the evening.